Application that allows us to communicate easier and faster with our loved ones. Main focus of the application is to ease use of it for elders.

First idea was to make device that will ease communication of our elders. Some people, especially elder ones, don’t like to mess with technology. They do not know terms like user account, domain, password (don’t want to raise WWII memories). They really want to take device home, plug it and communicate. 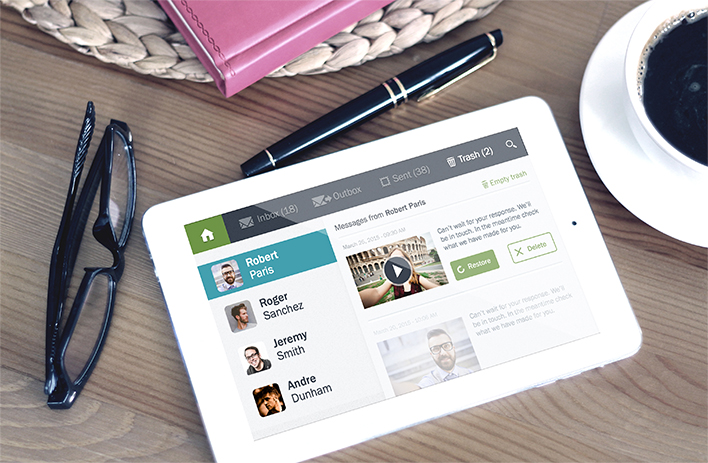 Device should have a frame to hang on the wall or stand on the working desk. And given that elders like slideshow of their grandchildren, a frame plus slideshow feature would be a good shot. Beside this, you don’t want to stand ten minutes beside the wall if someone sends you a long message, so the device needs to be detachable and to have some level of autonomy – meaning WiFi, battery and charging circuit.

Finally, ease of use was our main focus, so the device should have wireless charging feature to avoid annoying micro USB connector plugging.

And of course, device aim consumer market, so it has to cost almost nothing.

To summarize, our device must have following hardware features: Speaker/microphone/display, camera, WiFi, wireless charging, wall/desk frame. Logical solution was to choose some of existing tablet devices and to do additional changes. And of course, to make a frame as a docking station.

We decided to use 7′ tablet because of price, and we put our quote request on Alibaba. A big mistake! I found myself buried with ton of offers, and the next week have more than two hundred email threads open.

Most cheap tablets have 0.3M pixel camera, and 800*480 display resolution. We consider this as not enough for having acceptable for video communicator, so we asked manufacturers to provide 2MP camera and 1024*600 pixels of display resolution. Most of them quickly responded that they can provide required improvements, but when they send their offer, there are old figures in it. I repeated our request, they same happened. After several annoying iterations, I eliminated most of them, and left with one that provided best communication.

Chinese manufacturers consider you as seriously only if you order more than six figure quantity, especially if you ask for something specific. So it took few weeks of negotiation about camera and display changes because we only wanted dozen tablets for feasibility stage. But finally we made the deal for some $38 and received tablets. To be more precise, customs office receive tablets.

According Serbian laws, you can import one tablet, but if you try two, it is assumed to be for commercial purposes, and that draw millions of complications from one that says that you can’t import two tablet as private person, only as company, or you need to have certificate of conformity for product you intend to import. Only one who has done this paperwork know what annoying crap this could be, from obtaining valid certification documents from Chinese producers, to “dead horse” agility of local government administrative offices.

Luckily, my dear professor pointed me to the right person in regional agency for telecommunications, and she told me that according regulations of import article 4, company can import devices without certificate of conformity if they are intended to be used for software development only. For this, you have to ask official opinion from competent ministry, pay that some $150 and wait few days more. That few days in our case turned in to weeks, and that dangerously approached limit range of 40 days, when customs would return goods to sender. That stress generated new approaches, and helped me find friend working in that ministry. He found that men who’s in charge for document we needed is ill, and of course nobody replaced him. So my friend pulled some strings, and after half of day I had paper in hand, and tomorrow I had tablets on my desk.

First impressions were quite fine for $38 tablets.

I tested camera and comparing with my Samsung phone 2MP front camera was lover light sensitivity, but acceptable. Later, when programmers had problem to set desired resolution, we found that our 2MP camera is actually 0.8MP camera.

To avoid accidental drop out, we needed some magnet reinforcements, so we needed to mold magnets into frame, and we needed to open tablet to put magnets and Qi wireless receiver in it.

After few iterations, we end up with coolest frame shape.

And when we thought that everything would be fine, new problem appeared. Sound quality was really, really bad. I missed to test in detail when I got tablets, and even if I did, I wouldn’t return them. Somehow, we needed to make it work.

It was obvious that PCB designers hadn’t split analogue and digital grounds properly. I tried to find cause of that on the board, in order to discern some way to overcome it, but on multi layer PCB it is always tilting at windmills.

Finally we left alone with two options. One was to mess with android microphone driver, and to add some high pass filter between input and AGC. That filter would reduce or eliminate any 10Hz component, which is distorted anyway on $38 tablet, and makes AGC to work as mentioned. Second was to amplify signal enough, and make it dominant over 10Hz noise. And given that we didn’t had android driver expert for option one, we went for the second.

Microphone pre-amplifier made some improvements, but not fix problem totally, because in any case there was some noise component to reduce amplification, and we couldn’t raise pre-amplification level over some limit. So we tried to add speaker amplifier, but we didn’t find simple solution: built 1W amplifier was similar to TPA2005D1 Texas Instruments chip, and we made some 20% but improvement using it, not more. Dominant factor was thin plastic walls and bad or not at all calculated acoustic performance. We tried with quality speakers, change places of speaker, drilling hole on front surface for sound, but all of that brought little to our sound quality and volume. To embed more than 1W we would need to raise existing 3V to 6V so that further draw additional dc-dc converter that would make more noise…. so we decided to put stick in the ground and go only with microphone pre-amplifier.

We made some one layer PCB, which is not my first choice in a world of regional and Chinese manufacturers, but there was big reason for that. You can’t get any PCB from decent manufacturer in less than seven days, and these one layer boards made by old good photo process were in my hands in less than 24 hours after sending document files to the guy. 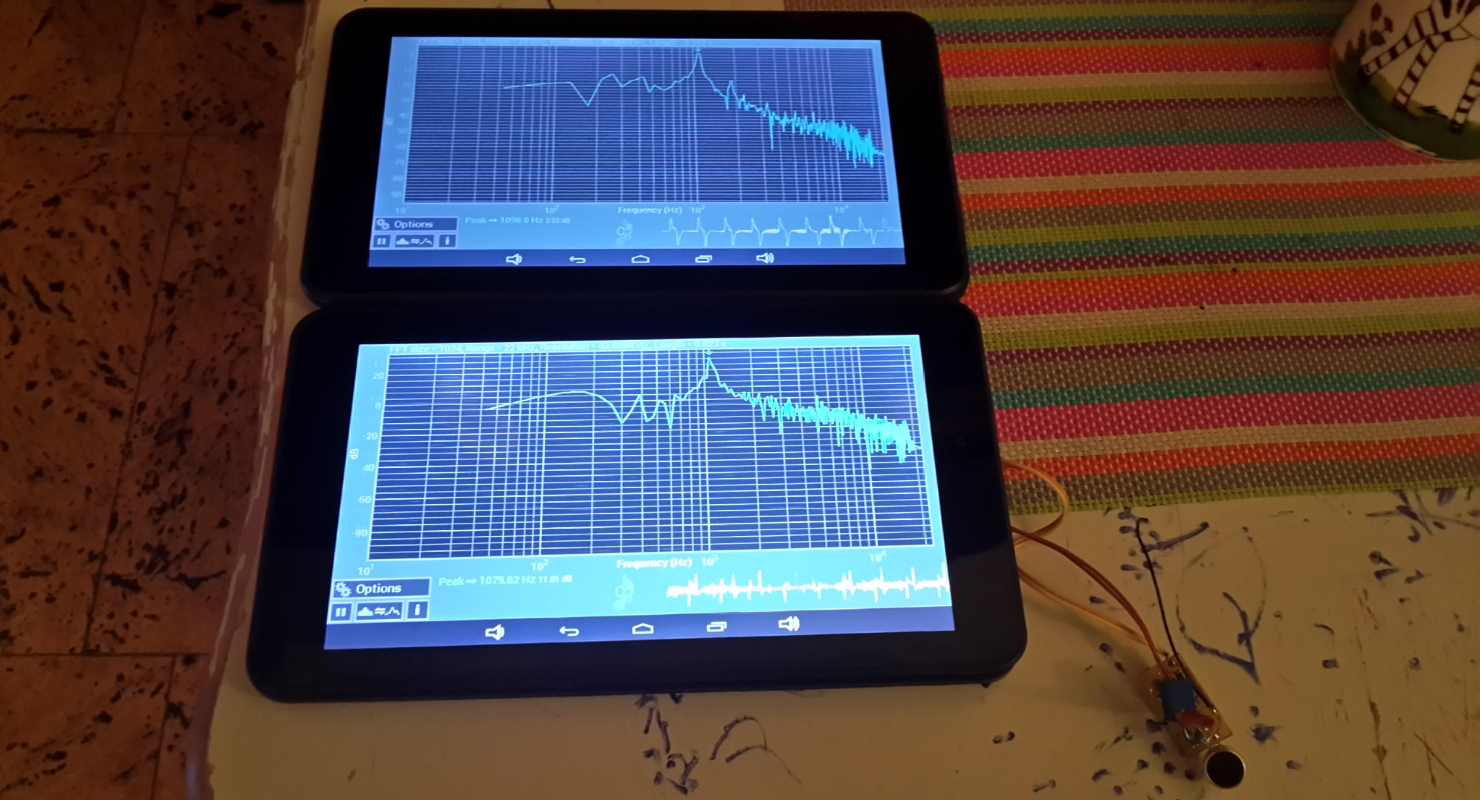 After we embed pre-amplifier (bottom tablet), on time domain it can be clearly seen that 10Hz component can be notified, but there is useful signal (whistled on approx 1KHz) also present.

After all, device end with very nice design and slightly less than moderate sound quality. But that was just enough for feasibility stage.

If we would decide to produce it, here is what the device production cost would be at the time: